NAIROBI, Kenya 29 January – Kenya’s Kwanza Alliance, made up of Vice President William Ruto (UDA), Musalia Mudavadi of the ANC and Moses Wetangula of FORD-Kenya, has expressed confidence in his ability to win the August 9 elections in the first round.

Leaders who visited Kirinyaga County on Saturday noted that their rapprochement has significantly boosted their chances of forming the next administration.

They fired a warning shot at their competitors from the Azimio La Umoja brigade led by former Prime Minister Raila Odinga.

“We came together not to seek positions but to help improve the lives of our people who continue to struggle with each passing day,” Ruto said.

He pleaded with the people of Kirinyaga to vote overwhelmingly for the alliance in large numbers so as to leave no doubt of their victory.

“You mountain people and those who will help us unite the country and make your vote count,” he said.

Mudavadi stressed that a victory for them in the first round will spare the country the burden of spending additional resources to prepare for a second round.

“The country is broke and we need money to do something else. Our economy is bad and we cannot afford to have a run-off,” he said.

The former finance minister, who came under heavy criticism following his rapprochement with Ruto, claimed he was more focused on improving the welfare of Kenyans.

“Our ideologies match and that’s why we want to make life in Kenya bearable, nothing less,” he said.

He pointed out that his union with Ruto was the guaranteed solution that Kenya needed to improve its fortunes.

“We are here because Kenyans matter, we want a united government,” he said. 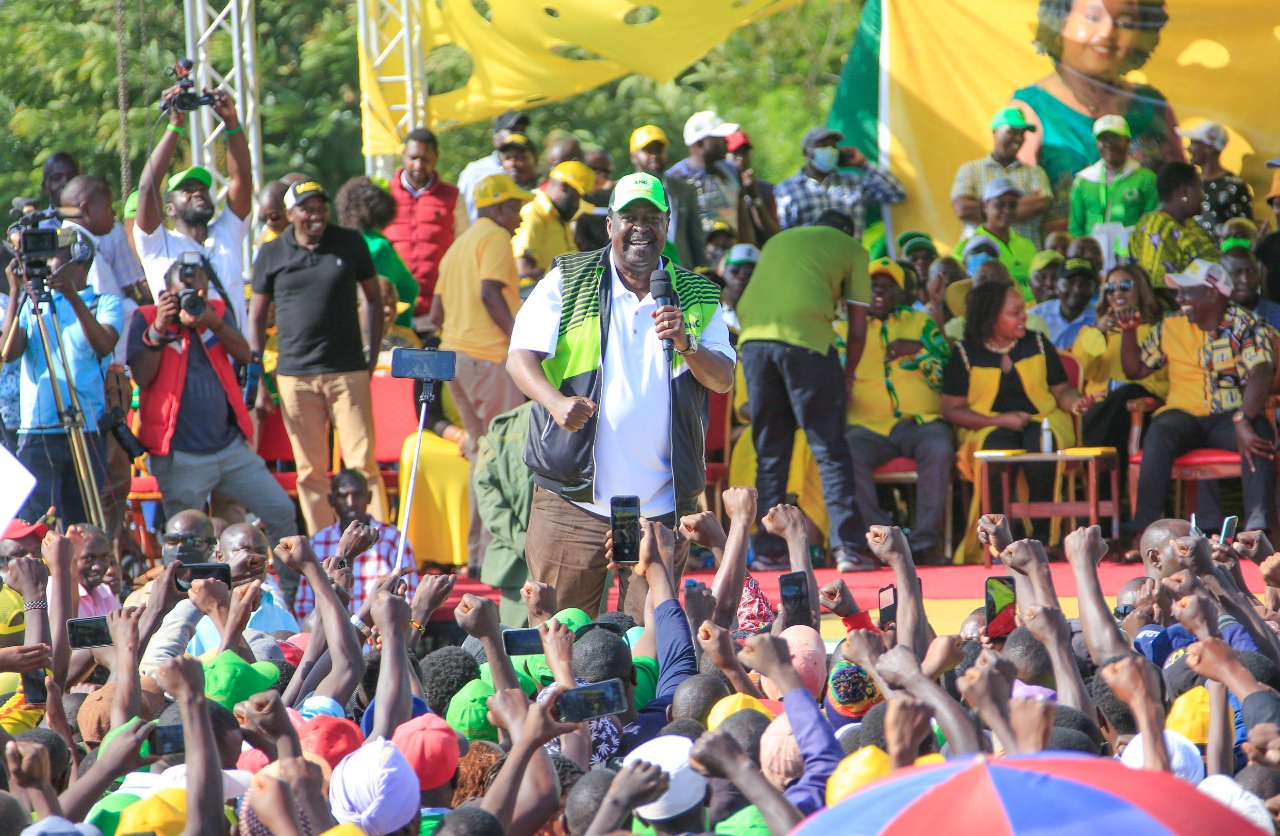 Wetangula, for his part, urged President Uhuru Kenyatta to focus on his retirement and be neutral.

“Focusing on Raila will ruin your legacy, focus on priorities otherwise you will be remembered as the president whose project failed,” he said.

The alliance has yet to publicly declare its presidential ticket and how it intends to share key government portfolios.

The United Democratic Alliance (UDA) on Saturday denied a report by the Standard newspaper detailing an alleged power-sharing deal with the ANC and FORD Kenya, calling it inaccurate and based on journalistic assumptions.

UDA General Secretary Veronica Maina said details of the cooperation with ANC’s Musalia Mudavadi and FORD Kenya’s Moses Wetangula will be revealed in due course.

“Details of cooperation between the UDA, ANC and Ford Kenya and any other political parties, if any, will be officially released by the principals at the appropriate time. In the meantime, I urge members of the public and our supporters to ignore such misinterpretation and treat it with the contempt it deserves,” she said.

The Central Region has become the first region in the country to record zero cases of Covid-19 since the start of the pandemic. The region has recorded 4,907 cases so far, 98% of which have fully recovered. Speaking at a press conference in Cape Coast, Deputy Regional Director of Public Health Dr Kwabena Sarpong said […]

The Central Region Assembly held its 20th ordinary meeting on February 25 at the City Hall of Asmara under the theme “Let us strengthen our global resilience”. During the meeting attended by the heads of regional administration, the PFDJ, national associations, line ministries and administrators of the sub-regions, the president of the regional assembly, Mr. […]