Entering Afghanistan is a bit like going to a movie premiere – you can’t just show up to the door and expect a seat on the balcony. invitation. I had obtained an invitation from a hotel in Kabul, but my passport was being held hostage at the Afghan embassy in Delhi. Then it all happened at the same time. The tourist visa was ready, the plane was taking off and 10 minutes before landing I decided to travel from the capital, Kabul, to the city of Herat near the Iranian border via a known rutted and rock strewn road. under the name of Central Route.

Also called Hazarajat, the Central Road begins on the outskirts of Kabul at dawn. Afghan dust rises with the chill of the spring sun, and the two filter down a roadside lined with four-wheel-drive Toyota minibuses, spewing diesel fumes and maneuvering for passengers. My Lonely Planet Central Asia guide – which I luckily found two days earlier – calls the drive through the Hindu Kush mountains and the lawless province of Ghor, “one of the most adventurous trips ever to take. ‘it is possible to do in Afghanistan “, and offers the clear warning:” the journey should not be taken lightly “. The route is passable from June to October. It is mid-May; the Taliban insurgency heats up over time; and everyone I interview in Kabul is adamant that the central road is a lost cause.

But here I am, wedged in the backseat of a mini-bus and pulling into traffic. Our 15 year old driver, Aziz (imagine a young Afghan man, Edward Norton) wastes no time crossing an intersection and running away from a policeman who is leaping into oncoming traffic to stop us. Five minutes later, the same policeman appears in our rearview mirror, screaming and banging on the dashboard of a requisitioned taxi. Aziz hops on the accelerator and the bus filled with burka-clad women, their screaming children, and a puzzled American in the backseat are in a high-speed car chase through suburb Kabul.

The foothills of the Hindu Kush rise sharply 16 km from the capital. But far from admiring the snowy panoramas, I watch the taxi rush towards us; then passing us; and now slide to the stop in front of us as the policeman – blue with rage, screaming and smoking a cigarette at the same time – climbs into the passenger seat of the bus, kicks the back of the car half a dozen times. Aziz’s head before pocketing a handful of Afghanis (the fluctuating local currency) and swiftly returning to Kabul. He can only get down from here, I think, as we make our way through the mountains and into the Bamiyan Valley just before the setting sun. 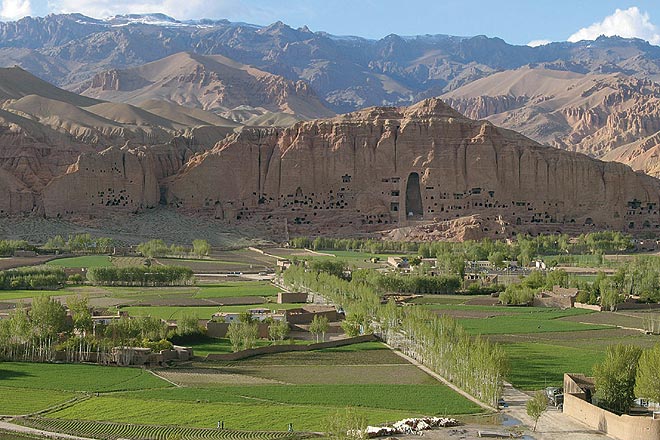 Listed as a UNESCO World Heritage Site, the city of Bamiyan is unfortunately famous for what it lacks, namely two 5th century Buddhas dynamited by the Taliban in 2001. But rather than mourning their disappearance, the region is full of archaeologists looking for a third, undiscovered Buddha. According to a 7th-century Buddhist monk’s travel account, the valley was also home to a “reclining Buddha” at least three times the size of the 55m standing Buddha which now lies in pieces. “When we look at the archives,” says Nader Rasoli, director general of the Institute of Archeology in Kabul, “we have to find them. “

But the problems facing archaeologists in Afghanistan are unique. The fledgling government has little money to spend on cultural projects, let alone security to prevent looting or illegal excavations at these sites. Additionally, 23 years of war and rebellion have left a campaign trapped by landmines and unexploded ordnance. Yet despite these obstacles, work continues in the Bamiyan Valley and across the country.

The next morning, I continue my journey west to Band-e Amir Lakes. A 70-year-old former math teacher sitting on a shotgun and speaking impeccable English orders the driver to let me out to a village called Koykinak (say: quickyneck). The village is little more than a mosque and a primary school. “Cross the valley and head for the breach in the cliff,” said the professor. “Then?” I ask. “Then ask the first villager you see the path to Band-e Amir,” he laughs, as the bus crosses a river and turns, leaving me on the side of the road with an audience of 40. schoolchildren. I descend the valley, through the breach in the cliff, and, with the instructions of the first villager I meet, arrive at the bluest lake – no, the bluest I have ever seen. 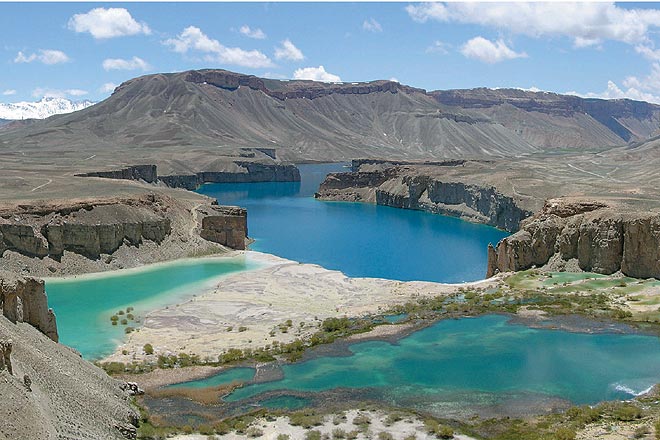 Band-e Amir (King’s Dam) is actually a series of five lakes separated by natural dams formed by sulfur deposits. Locals attribute this strange geological phenomenon to the son-in-law of the Prophet Muhammad, Ali. A ruined mud and straw mosque dedicated to Ali sits on the shore of the largest lake, Band-e Haibat (Awe Dam). Next to the mosque are three unmarked hotels / restaurants offering fresh fish for dinner and the bare minimum of accommodation for around $ 4 per night. During dinner on my second night at Band-e Amir, I am told that the central road is indeed open, wet and slow … but open.

I walk back to the road, walk to Yawkawlang, and pay another $ 10 to move another bus that afternoon. From Yawkawlang, the Toyota minibus is put to the test: getting stuck in muddy plains, fording rivers and crossing rocky passes. At one point, we pick up peasants with no fare for the journey. The driver, a man named Amin who has just returned to Afghanistan after fleeing to Iran and Turkey during the Taliban rule, points a finger at the sky, saying, “This is for God. His charity does not go unrewarded. At least five times the men and I are called upon to push the struggling van out of the chasms and mud pits.

Spitting dust and covered in gray Afghan mud, we arrive in the town of Lal Sarjang 24 hours later. While not exactly the geographic center of Afghanistan, Lal is certainly the midpoint point on the Central Road. It’s three days back in Kabul and three days ahead of Herat. After a one-day stopover in search of passengers, we set off through the province of Ghor. The bus broke down and a cold night passed by the side of the road near the town of Chaghcheran. Two days of regular driving later we reach the mountain village of Garmo. Garmo is the starting point of the Minaret of Jam, the second Unesco World Heritage site along the Central Road.

American poet William Carlos Williams once wrote: “I have discovered that most / the beauties of travel are due / to the odd hours we spend seeing them. Because I’m traveling with a bus full of locals who don’t want to spend half a day sightseeing, the driver and I wake up at the “odd hour” of 2 am. We exit Garmo to a ridge above the Hari Rud River and dive into a side canyon until the road and river literally merge. Guides gush with joy at seeing the minaret appear for the first time amid the steep canyon walls at the convergence of the Hari Rud and Jam Rud rivers.

We arrive in the darkness of 4 a.m. and almost hit the 65m high pillar. The driver and a curious passenger who came for the ride, descend to the river, wash, and kneel by the mysterious minaret (no one knows exactly why it was built here). From a hill, I watch the two men praying early in the morning and wait for the sun to rise just enough to light me up for a photo. Back in Garmo at 7 a.m., the nine other passengers finish their breakfast and prepare their luggage for the last day on the road. 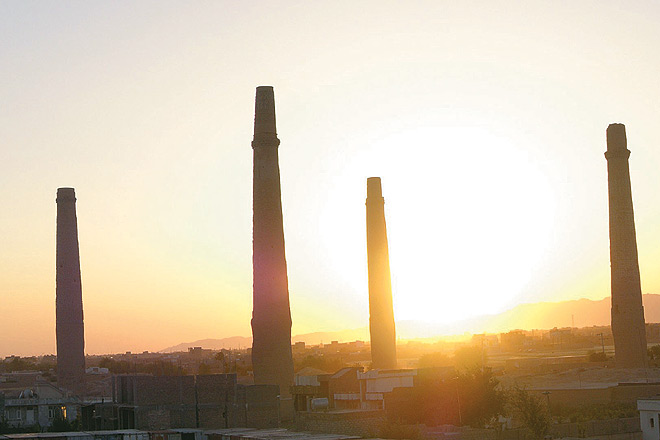 We reach Herat as the late afternoon sun sets behind the four tilting minarets of the ruins of the Baiqara madrassa. Eight hundred kilometers in eight days. Covered in dirt and dust, travelers – some pushing towards Iran, others returning home to Herat for the first time in years – bid each other farewell at the bus station. Dirty and thirsty, I’m looking for a shower and a beer – and not necessarily in that order. A day later, after a leisurely stroll through the city and a stop at Sultan Hamidy’s glass factory near the Friday Mosque, I catch a flight to Kabul, covering the same 800 km in 45 minutes. I look at the rivers, the lakes and these arid mountains. But you know, it’s funny, from above I really can’t see anything.

Getting There : Indian Airlines offers flights from Delhi to Kabul. Remember to contact the airline or your agent in Kabul to confirm your return flight.

Move : On foot, this is the best way to explore the markets, mosques and museums of Kabul and Herat. However, the one-two punch of suffocating dust and sloppy mud makes an aging Toyota Corolla cab, or even a horse-drawn rickshaw, a welcome sight. The cheapest and safest form of transport outside of Kabul is the private company KamAir (www.flykamair.com) or the state-owned company Ariana Afghan Airlines (www.flyariana.com). Both provide daily service from Kabul to Herat, Kandahar and Mazar-e Sharif. For a closer look at the countryside and its people, a Toyota Hiace minibus is the most adventurous form of transportation along the Central Highway. Get to the bus depot early (anywhere along an artery) as night driving is rare and an early departure is essential.

This article is taken from our Story Bank. It was first published in November 2015.

Passengers on the Pasco County public transport bus to Land O ‘Lakes asked county officials a question: Why are we driving 20 minutes away on Collier Parkway when no one is getting on or off? It turns out they were right. Almost. On average, only one person per week takes the Pasco bus system to […]